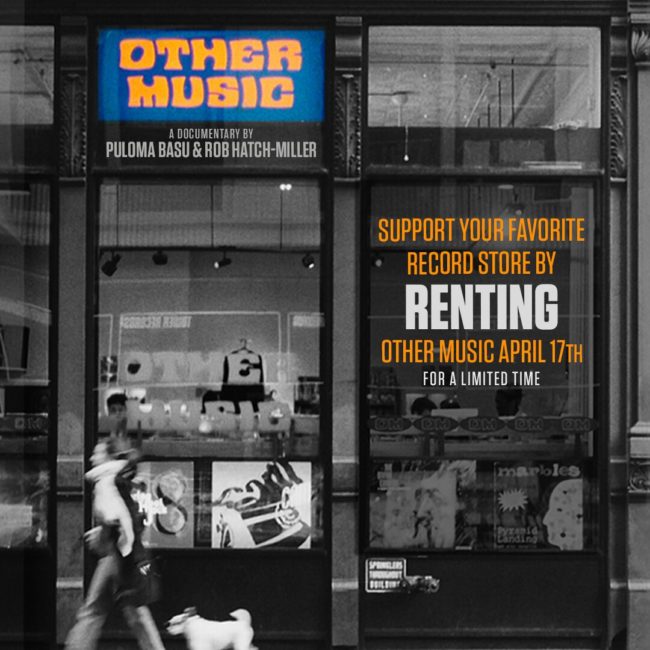 Watch a cool documentary about a legendary NYC record shop AND support your local record store at the same time!

You’ll buy a ticket for $11.50 with half of that rental fee going to The End of All Music and the other half going to the filmmakers.

A trip to NYC during the 2000s wasn’t successful without a trip to Other Music–a near perfect record store. It’s safe to say that the store–and later their record label of the same name–was a huge influence on The End of All Music and what we strive to be as a community record shop. We think you’ll enjoy this…and besides, what else you got to do!?!

Other Music was an influential and uncompromising New York City record store that was vital to the city’s early 2000s indie music scene. But when the store is forced to close its doors due to rent increases, the homogenization of urban culture, and the shift from CDs to downloadable and streaming music, a cultural landmark is lost. Through vibrant storytelling, the documentary captures the record store’s vital role in the musical and cultural life of the city, and highlights the artists whose careers it helped launch including Vampire Weekend, Animal Collective, Interpol, Yeah Yeah Yeahs, William Basinski, Neutral Milk Hotel, Sharon Van Etten, Yo La Tengo and TV On The Radio. “Celebrates and immortalizes the culture of the record store.”
-Jen Aswad, Variety

“One of the worlds greatest record store’s gets a fitting eulogy .”
-John DeFore, The Hollywood Reporter

“As hubs like Other Music struggle to remain in existence, we think it’s important to celebrate what spaces like these have meant to people in the
past, and to explore how their spirit can live on in an increasingly digital world”
-Lydnsey Havens, Billboard