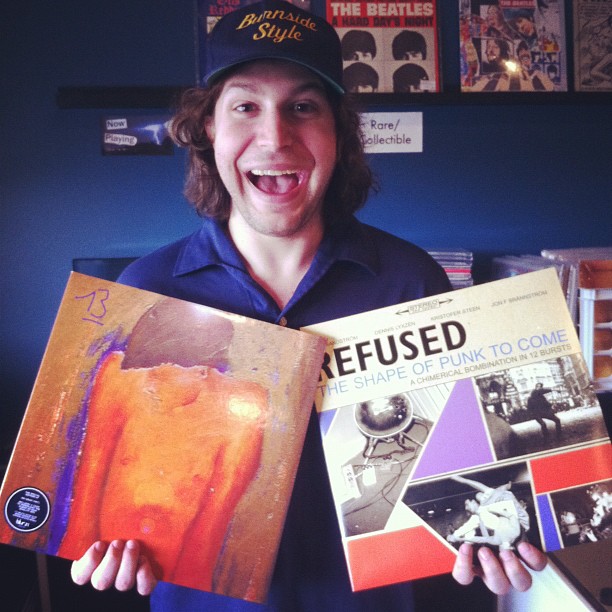 Our good buddy, Jimmy Cajoleas, wrote a book! Jimmy was one of the first employees at The End of All Music and he’s directly responsible for us having Black Flag and Blur sections in the shop. Jimmy worked at the record store while he was finishing up his MFA in Creative Writing at the University of Mississippi here in Oxford. He also played guitar in Colour Revolt–one of the best bands to ever come out of Mississippi. He now lives in New York. Here at the record store, we miss his enthusiasm for new music, his avid listening and championing of new artists, and deep dives into all things weird in the record world.

Jimmy’s new young-adult novel, Goldeline, is out November 14th from HarperCollins. You can buy a copy from Square Books now! Jimmy will be at Square Books on Tuesday, Nov. 28th at 5 p.m. to read and sign copies of Goldeline. We’ll be buying copies for every kid (and adult) we know.

We asked Jimmy a few questions about his new book and what he’s been up to lately. Not surprisingly, his list of favorite records of the year is crazy long and his love of watching movies takes up most of the interview but that’s why we love Jimmy.

Read the interview below and buy the book now. What’s your favorite record(s) of the year so far?

There have been so many great records this year it’s crazy. I have a constantly-updated “Favorite Songs of 2017” Spotify playlist that right now has about 140 songs on it. But here are a few records I’ve loved the most:
Julien Baker – Turn Out The Lights
Soccer Mommy – Collection
Japanese Breakfast – Soft Sounds from Another Planet
SZA – Ctrl
Charly Bliss – Guppy
Jay Som – Everybody Works
Dent May – Across the Multiverse
Jake Xerxes Fussell – What in the Natural World
Vince Staples – Big Fish Theory
St. Vincent – MASSEDUCTION
Moses Sumney – Aromanticism
Kaitlyn Aurelia Smith – The Kid
Fever Ray – Plunge
Bonus – III
The Replacements – For Sale: Live at Maxwells 1986
Big K.R.I.T. – 4eva Is A Mighty Long Time
Phum Viphurit  – Manchild
Big Thief – Capacity
Slow Dive – Slow Dive
Bell Witch – Mirror Reaper
Perfume Genius – No Shape
Vagabon – Infinite Worlds
Pallbearer – Heartless
And about a hundred others that all rule.
Do you listen to music when you write?
Always. I kind of can’t write without it. My brother bought me these amazing noise-canceling headphones and I use them daily.
What kind of music would you associate with the book? Is there soundtrack in your mind for it?
There absolutely is a soundtrack for the book. Each character kind of has their own musical theme, I think, as do most of the scenes in the book. I definitely used music as inspiration and as mood-setting.
What were you listening to while you were writing it?
Whenever I get stuck, the first thing I throw on is Side B by Void. It’s the gnarliest record I know that isn’t pure noise, and it obliterates the part of my brain that overthinks things.  All I can do when that record plays is write. Sometimes you need something to keep you from thinking straight. The album Dopethrone by Electric Wizard is really good for that too.
I listened to Joanna Newsom’s record Ys a lot when I was just freewriting, excited to have found a new voice that was fun to write in. I feel like that record informed a lot of Goldeline’s character. Similarly, I used Angel Olsen’s Burn Your Fire For No Witness (especially the song “Windows”) to figure out Goldeline’s mother. For every scene with the Preacher, I blasted Tender Prey and Murder Ballads by Nick Cave and the Bad Seeds. It’s a Wonderful Life by Sparklehorse is always a go-to for me. I also listened to a lot of Skip James, especially the Complete Early Recordings. The first Fever Ray album was pretty big too. Neutral Milk Hotel always.
And of course, tons and tons of Water Liars.
What are you most excited about when returning to Oxford, besides coming by the record store?
I’m excited to see all my friends. I miss everybody so much. And also to eat a cheeseburger from Handy Andy. I like a lot of burgers up here, but it’s only Handy Andy that I dream about.
You’re a musician and a writer…what’s easier?
They’re both hard. I was never a particularly talented musician. I just worked really hard at it, and surrounded myself with tons of musicians who were way better than me. The writing thing is all me, so it’s a lot more pressure, but there’s also way more freedom in it. I can make the whole thing myself. I mean, I can’t sing at all–I have the worst singing voice on earth–but I can write okay.
What were some YA novels that you loved as a kid?
I loved John Bellairs so much. The Mummy, the Will, and the Crypt was my favorite book.
What have you been reading lately?
I just finished Jesmyn Ward’s new book, and it was fantastic. Loved Willy Vlautin’s new one too. Angie Thomas’ The Hate U Give was really terrific. I read Thomas Merton’s Raids on the Unspeakable the other day and that really freaked me out, in a good way. I’ve also been reading all of Patricia Highsmith’s Ripley books, and they’re just wonderful. Tom Ripley might be one of my favorite characters of all time.
Seen any good movies?
I’m between projects, so I’ve been watching a movie or two a day recently. It’s been awesome. Mary Marge got me this thing called MoviePass, where you pay ten bucks and you can see a movie in the theater every day. I saw The Florida Project, which was unbelievable. I could watch that movie a million times. It Comes At Night was really great too, as was Get Out. But this French cannibal movie called Raw is maybe the best new film I’ve seen so far this year.
My favorite thing about living in New York is all the classic movies constantly playing in theaters. In the last couple of months alone I saw Au Hasard Balthazar and Gun Crazy and La Chinoise and Kill, Baby…Kill! for the first time. I saw Stalker and Opening Night at the Lincoln Center. Me and my buddy Will always go to Terror Tuesday at the Alamo Drafthouse, and that rules. I saw William Friedkin’s Bug, which I know people hate, but I think it’s a total masterpiece. Oh man, a month ago I saw The Straight Story for the first time, which I’m pretty sure is my favorite David Lynch movie. It was so great I had a hard time sitting still through it. I kept wanting to jump up and take a lap around the room every time something awesome happened.
The other day I went to a screening of the DVD portion of that new Bob Dylan Christian-era Bootleg Series, and Michael Shannon was there. He did a Q&A with the director and Luc Sante. Some guy in the crowd asked Michael Shannon a pretty rude question, and Michael Shannon just went off on him. I mean, he Michael Shannon-ed the hell out of the guy. He was the coolest person I’ve ever seen in real life.