Our Favorite Records of 2017…so far 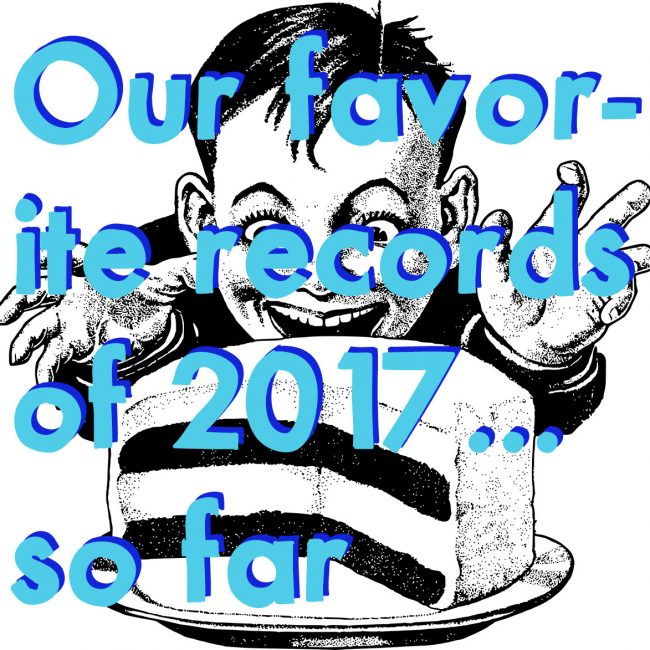 We’re hitting the summer-time lull with new releases after a pretty incredible first 6 months into 2017. It’s been an up-and-down year so far with endless news cycles, but our favorite artists keep churning out the goods. All of these records are available in our online shop. So if you see something you just gotta have then go here.  We’re also working on our list of favorite reissues, and it’s a long list…so stay tuned for that in a week or two.

We’re sure to be leaving out some titles, so we’ll update this when a record we missed is just too good to not be on this list.

In no particular order…our favorite records of 2017…so far: “Death Song isn’t a wild step in any new direction but instead a grindstone-polished showcase of what the group does best.” –MAGNET

“Death Song, their fifth full-length, is both unlike anything they’ve done before and also the most purely Black Angels album they have released.” –Paste Magazine

“…their fifth album marks a return to the threatening drones that made their first two so powerful.” – The Observer

“If you’re in the market for an album that will summon the dark atmospheres, Death Song certainly delivers the goods, and it demonstrates that the Black Angels slowly but surely improve each time they go into the studio.” -All Music “Rocket feels like one of the year’s most endlessly generous records, as Alex G’s restraint is our gift that keeps on giving.” -Pitchfork Best New Music

“The raw and at times, ferocious navigation of the album soars in its earnest delivery and marks a career-defining release for (Sandy) Alex G.” -The Quietus Jake Xerxes Fussell What in the Natural World (Paradise of Bachelors)

“A record that yields a procession of hidden treasures.” –Uncut

“Fussell has a deep respect and affinity for the Southern folk vernacular, though he also maintains his childlike awe for it. [What in the Natural World] marks a move into more existential questions … vignettes of Southern life, with an open-hearted groove that would please scholars and little kids alike—Fussell’s burly, winking voice is made for storytelling. “Have You Ever Seen Peaches” is a hair over six minutes long, but that drone could sustain it for hours … running unbroken and buoyant as a shoal of fish darting downriver, and counterbalancing his open-hearted picking.” -NPR

“While some have called Fussell’s music “atmospheric,” the descriptor misses his historical grounding; on the flipside, any implication of “root” overlooks the ease and freeness of his sound.The image of a river, featured on both of his albums’ covers, is well suited—the history of each song selection, like tributaries, flow into the main waterway, feeding a powerful current of evolution and exchange. And here is Jake Xerxes Fussell, floating down that river, strumming away.” –The Oxford American

“A human jukebox, a raw and penetrating voice out of time, a genuine bluesman with the heart of a mystic. His debut, Jake Xerxes Fussell, just out from Paradise of Bachelors, is pretty damn perfect. This is the kind of record I feel like I was born to listen to. That voice. That guitar. Man.” -Bill Boyle, No Depression “It’s A Myth is like a musical Mondrian painting: all bold lines and defined patterns effortlessly delivered, but oblique and enigmatic too.” –MOJO

“It’s a Myth is the natural progression from Gymnastics, and so across the record, Moolchan refines her sound within these limits. Inside and outside of the music, she embraces the self-built space that she crafted for herself.” -Pitchfork

“It’s a Myth is a stripped-down indie rock/hip-hop hybrid that says plenty and makes its own cool, low-key fun at the same time.” -Allmusic “Since their inception, Slowdive’s music has always sort of felt familiar. That’s sort of what got them in trouble with critics the first time around, that their diffuse guitar heroics sounded so much like My Bloody Valentine and the rest of the so-called “scene that celebrates itself” that it wasn’t worth really digging into. But that thinking always missed the point. Even at their most out there, in their most experimental phases, their music was so great because it felt like something you’d heard before—a distant memory of rock records long since forgotten. As a stripped return to their earliest efforts, Slowdive may very well be their most comforting. It always feels good to come back home.” –SPIN

“The shoegaze legends return with their first album in 22 years, a precise and altogether gorgeous showcase of their peerless ability at production, mood, and songcraft.” -Pitchfork Best New Music

“So here’s the good and potentially semi-surprising news: Slowdive’s new album falls prey to none of the usual reunion drawbacks or stasis. Slowdive is as stunning a comeback record as I can recall in recent times. It’s on par with the band’s best work.” -Stereogum “Much like the recent A Tribe Called Quest record, Damn. is a brilliant combination of the timeless and the modern, the old school and the next-level. The most gifted rapper of a generation stomps into the Nineties and continues to blaze a trail forward.” –RollingStone

“Three months in, DAMN. feels like our first Trump-era classic. It’s as bold and as hard and as hopeful as it is bursting with vitriol. It’s as distracting as it is inciting. It’s as cohesive as it is dense.” -Tiny Mix Tapes

“Lamar trusts every idea to stand on its own. When you’re making art this substantial, vital, and virtuosic, there’s no need to wrap a tidy bow around it.” -The A.V. Club “He beefs things and takes a full-band approach on Big Bad Luv, which contains almost as many hooks as it does Moreland’s hard-earned kernels of truth.” –American Songwriter

“Big Bad Luv can hold its own next to any of the great Americana-tinged rock ‘n’ roll records of the past, from Scarecrow to Full Moon Fever to Copperhead Road.” -Pop Matters “Each of his solo albums reflects that musical range, and Drunk (Brainfeeder) crams 23 songs and snippets into 51 minutes that evoke the sumptuous jazz-infused R&B of the ’70s, filtered through catchy melodies, undergirded by virtuoso musicianship and salted with conflicting emotions.” –Chicago Tribune

“Additional guests Kendrick, Pharrell, and Wiz Khalifa add to the star power, but the main attraction is Bruner’s singular combination of tremulous yet fluid bass and aching falsetto.” -Allmusic “Prisoner positions Adams in a comfortable pocket: one foot in a cowboy boot, a sneaker in Paul Westerberg’s garage, and enough quirky proclivities to prevent him from sounding like anyone but Ryan Adams. The opening guitar crunch on lead single “Do You Still Love Me?” could cue an ’80s training montage before it settles into a power ballad buoyed by swirling keys. Westerberg once had a dyslexic heart, but here Adams diagnoses himself as having a blind one, an impairment that he knows will keep him asking that titular question for years to come. This struggle against his own nature and hangups surfaces throughout the record. On the gorgeous, mid-tempo “Doomsday”, Adams can’t help but proclaim that he “could wait a thousand years” while at the same time admitting that he doesn’t know “how to let [his] feelings go.” To what extent is Adams both a prisoner and his own jailer (“Prisoner”), the man still residing in a house full of memories and the one who’s actually haunting it these days (“Haunted House”)? The heart has a remarkable knack for mending itself, but too often this patient just can’t stay out of his own way.” -Consequence of Sound Mount Eerie A Crow Looked at Me (Elverum)

“Written and recorded August 31st to Dec. 6th, 2016 in the same room where Geneviève died, using mostly her instruments, her guitar, her bass, her pick, her amp, her old family accordion, writing the words on her paper, looking out the same window.

Why share this much? Why open up like this? Why tell you, stranger, about these personal moments, the devastation and the hanging love? Our little family bubble was so sacred for so long. We carefully held it behind a curtain of privacy when we’d go out and do our art and music selves, too special to share, especially in our hyper-shared imbalanced times. Then we had a baby and this barrier felt even more important. (I still don’t want to tell you our daughter’s name.) Then in May 2015 they told us Geneviève had a surprise bad cancer, advanced pancreatic, and the ground opened up. What matters now? we thought. Then on July 9th 2016 she died at home and I belonged to nobody anymore. My internal moments felt like public property. The idea that I could have a self or personal preferences or songs eroded down into an absurd old idea leftover from a more self-indulgent time before I was a hospital-driver, a caregiver, a child-raiser, a griever. I am open now, and these songs poured out quickly in the fall, watching the days grey over and watching the neighbors across the alley tear down and rebuild their house. I make these songs and put them out into the world just to multiply my voice saying that I love her. I want it known.

“Death Is Real” could be the name of this album. These cold mechanics of sickness and loss are real and inescapable, and can bring an alienating, detached sharpness. But it is not the thing I want to remember. A crow did look at me. There is an echo of Geneviève that still rings, a reminder of the love and infinity beneath all of this obliteration. That’s why.” – Phil Elverum, Dec. 11th, 2016, Anacortes “To fully understand the layers in Jlin’s work, it is first important to identify her music as part of a very specific scene. Its almighty rhythm-first tenet comes from the footwork dancers and producers of Chicago’s South Side, a tight-knit group practicing frenetic, improvised battles using high-speed adaptation of ghetto-house and hip-hop steps. The original music was so central to the movement, that when the time came, the genre was named after the dance — footwork — and sounded increasingly like what would have happened if drum’n’bass was invented in Chicago instead of London. (Which is maybe why two UK labels, Planet Mu and Hyperdub, have taken to spreading it throughout the world.)

And yet, while Jlin’s beats were undoubtedly raised on footwork and carry the scene’s central purpose, they expanded upon Chicago almost from the offset, broadening footwork’s creative perspective by contextualizing it in a global culture.” -NPR Don Bryant Don’t Give Up on Love (Fat Possum)

Record of the Month Club pick for May 2017

Best known as a staff songwriter under Willie Mitchell at Hi Records and as the husband of Hi star Ann Peebles, Don Bryant is also a fine, under-appreciated singer in his own right, having penned “I Can’t Stand the Rain,” for Peebles. Precious Soul is one of our all-time-favorite soul records…a Memphis classic that deserves a spot next to any of Otis Redding’s, Al Green’s, or Aretha’s records.

“More than 40 years after penning his biggest hit, Don Bryant is back in the game. Bryant — who sang in a gospel quartet before linking up with R&B bandleader Willie Mitchell and becoming a go-to songwriter at Memphis’ Hi Records — might be best known for writing the 1973 slow-cooker “I Can’t Stand The Rain” with singer Ann Peebles, whom he married shortly afterward. Now, at 74, he’s preparing to release a new album of original songs, Don’t Give Up On Love.” -NPR

…and a few others we’ve been spinning a lot in the shop: