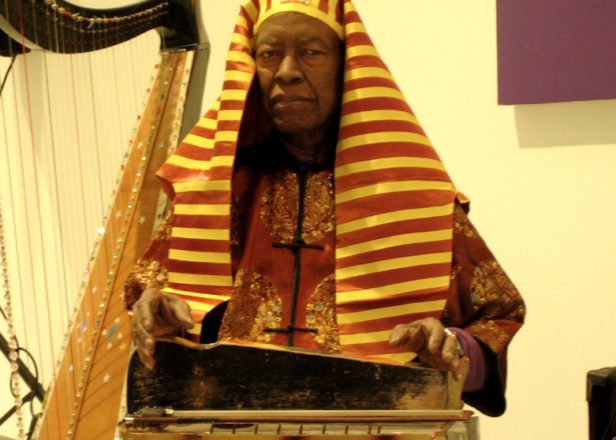 We received an email recently from our friend Lisa that contained a link to an obituary in the NY Times. The obituary was for Kelan Phil Cohran–jazz musician in Sun Ra’s famous Arkestra and music advocate. Cohran, to our dismay, was born in Oxford, Mississippi in 1927. How had we never known about this? Not only that but we couldn’t really find anyone in town that was familiar with Cohran or his work. Luckily, the fabulous label, Honest Jon’s Records, released an album of Cohran’s work a few years back (see photo above, and now in stock at the shop)…seemingly the only thing in print by the late artist.  You can still get your hands on the Malcolm X tribute album reissued by Mississippi Records, but it’s pricey at this point. We’re now dedicated to finding out more about Cohran’s birth and time spent in Oxford…stay tuned.

Here’s a link to what appears to be the artist’s official website.

Here’s a nice article and obituary from FACT magazine.

Here’s a link to Cohran’s artist page on the Honest Jon’s Records website.

Cohran was born in Oxford, Mississippi and grew up in St. Louis, Missouri. He played trumpet in bands led by Jay McShann in the early 1950s, and then in a U.S. Navy band.[2]

He was introduced to the Sun Ra Arkestra by John Gilmore in 1959.[3] He appeared on the albums Fate In A Pleasant Mood and Angels and Demons at Play among others. He played mostly trumpet and sometimes stringed instruments such as the zither.

When the Arkestra moved from Chicago in 1961, Cohran declined to accompany them. In 1965 he took part in the founding of the Association for the Advancement of Creative Musicians (AACM). He formed the Artistic Heritage Ensemble with Pete Cosey, future members of Earth, Wind and Fire’s horn section and Motown percussionist “Master” Henry Gibson, among others. By this time, he was playing the harp, cornet, French horn, baritone saxophone and percussion. The group recorded the album On the Beach around 1967.

Early in his career, he invented an instrument he called the Frankiphone or the Space Harp, which is actually an electrified mbira or kalimba; he played it on some of Sun Ra’s early albums. This instrument inspired Maurice White to use an electrified Kalimba in performance with Earth, Wind and Fire.[3] Cohran said that he taught White and his brothers music in their youth, much as The Wailers were tutored by Joe Higgs. On the Beach features the Frankiphone on the title track, as well as a piece called “New Frankiphone Blues”.

Several of Cohran’s sons make up eight of the nine members of the Hypnotic Brass Ensemble, which consists of four trumpets, two trombones, one euphonium, a sousaphone and drums. Cohran taught voice and music to inner city youth and adults at Northeastern Illinois University’s Center for Inner City Studies. He died in Chicago on June 28, 2017 at the age of 90.