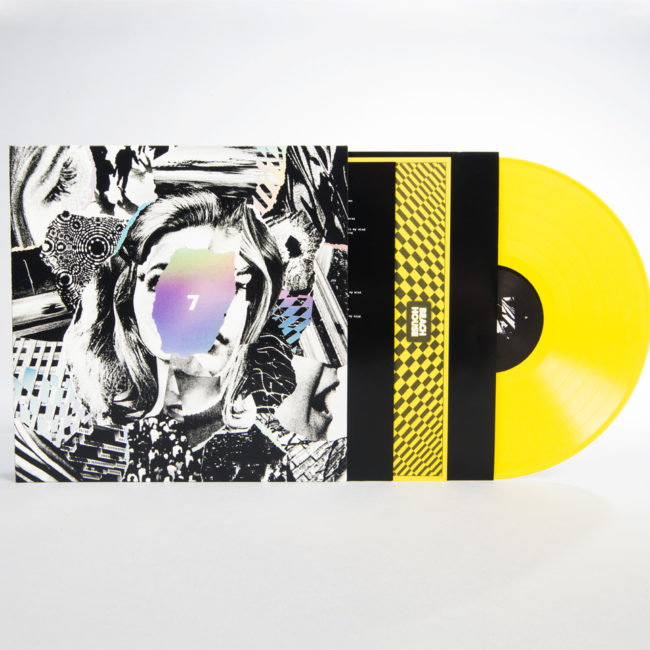 The May selection for our Record of the Month Club is the new album from the always dreamy Beach House. The new album titled 7 continues the bands streak of great records.

Club members will not only be getting the yellow-vinyl LOSER Edition from Sub Pop, but the band was kind enough to autograph posters exclusively for our ROTM Club. Sign up now or miss out.

We got to the catch the band live in Oxford at the Lyric Theater last week. The show was excellent and proved that Beach House is a band truly at the top of their game as they continue to put out excellent records.

These will begin shipping on Friday, May 11th, which is the record’s release date.

7 is our 7th full-length record. At its release, we will have been a band for over 13 years. We have now written and released a total of 77 songs together.

Last year, we released an album of b-sides and rarities. It felt like a good step for us. It helped us clean the creative closet, put the past to bed, and start anew.

Throughout the process of recording 7, our goal was rebirth and rejuvenation. We wanted to rethink old methods and shed some self-imposed limitations. In the past, we often limited our writing to parts that we could perform live. On 7, we decided to follow whatever came naturally. As a result, there are some songs with no guitar, and some without keyboard. There are songs with layers and production that we could never recreate live, and that is exciting to us. Basically, we let our creative moods, instead of instrumentation, dictate the album’s feel.

In the past, the economics of recording have dictated that we write for a year, go to the studio, and record the entire record as quickly as possible. We have always hated this because by the time the recording happens, a certain excitement about older songs has often been lost. This time, we built a “home” studio, and began all of the songs there.  Whenever we had a group of 3-4 songs that we were excited about, we would go to a “proper” recording studio and finish recording them there. This way, the amount of time between the original idea and the finished song was pretty short (of the album’s 11 songs, 8 were finished at Carriage House in Stamford, CT and 2 at Palmetto Studio in Los Angeles).

7 didn’t have a producer in the traditional sense. We much preferred this, as it felt like the ideas drove the creativity, not any one person’s process. James Barone, who became our live drummer in 2016, played on the entire record. His tastes and the trust we have in him really helped us keep rhythm at the center of a lot of these songs. We also worked with Sonic Boom (Peter Kember). Peter became a great force on this record, in the shedding of conventions and in helping to keep the songs alive, fresh and protected from the destructive forces of recording studio over-production/over-perfection.

The societal insanity of 2016-17 was also deeply influential, as it must be for most artists these days. Looking back, there is quite a bit of chaos happening in these songs, and a pervasive dark field that we had little control over. The discussions surrounding women’s issues were a constant source of inspiration and questioning. The energy, lyrics and moods of much of this record grew from ruminations on the roles, pressures and conditions that our society places on women, past and present. The twisted double edge of glamour, with its perils and perfect moments, was an endless source (see “L’Inconnue,” “Drunk in LA,” “Woo,” “Girl Of The Year,” “Last Ride”).

In a more general sense, we are interested by the human mind’s (and nature’s) tendency to create forces equal and opposite to those present. Thematically, this record often deals with the beauty that arises in dealing with darkness; the empathy and love that grows from collective trauma; the place one reaches when they accept rather than deny (see “Dark Spring,” “Pay No Mind,” “Lemon Glow,” “Dive,” “Black Car,” “Lose Your Smile”).

The title, 7, itself is simply a number that represents our seventh record. We hoped its simplicity would encourage people to look inside. No title using words that we could find felt like an appropriate summation of the album.

The number 7 does represent some interesting connections in numerology. 1 and 7 have always shared a common look, so 7 feels like the perfect step in the sequence to act as a restart or “semi-first.”  Most early religions also had a fascination with 7 as being the highest level of spirituality, as in “Seventh Heaven.”  At our best creative moments, we felt we were channeling some kind of heavy truth, and we sincerely hope the listeners will feel that.