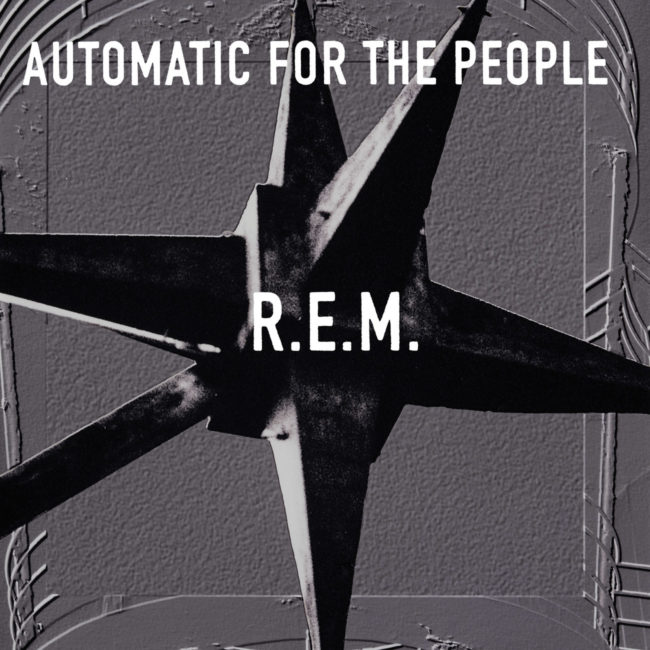 The November selection for our Record of the Month Club is the 25th Anniversary reissue of R.E.M.’s Automatic for the People. This record has always been one of our favorite R.E.M. records and up until now it’s been one of the harder records to track down on vinyl fetching exorbitant prices on the secondary market. So we’re glad to be able to offer it to our club members in a shiny, new packaging.

Michael Stipe and Mike Mills both chatted to NPR’s All Songs Considered recently. It’s a great interview and worth checking out. You can listen to that here. In the summer of 1991, R.E.M. was riding an unexpected wave of monumental success. The once little-known rock band from a sleepy southern town was nearly a decade into its career when it suddenly found itself sitting on a number one hit, “Losing My Religion,” from the band’s seventh full-length, Out Of Time. It was an album that would eventually sell more than 18 million copies, with other popular hits like “Shiny Happy People” and “Near Wild Heaven.”

The success of Out Of Time gave the four guys in R.E.M. the creative license they needed to take more chances with their music and challenge any expectations from both their label, Warner Bros., and their fans.

So when they settled into the studio to begin recording their much anticipated follow-up, singer Michael Stipe, bassist Mike Mills, drummer Bill Berry and guitarist Peter Buck took an unexpected turn: They went dark. The songs that would ultimately make up the landmark album Automatic For The People were slow and melancholy. The lyrics were more introspective, reflecting on mortality, lost youth and the sanctity of life. It was an album of tremendous beauty, deeply affecting poetry and breathtaking production.

This month R.E.M. is celebrating the 25th anniversary of Automatic For The People with a deluxe box set that includes a re-mastered version of the album, demos and outtakes, live recordings, a book of rare photos and videos. In this conversation with Michael Stipe and Mike Mills, the two look back on what inspired the band to take on this new direction and what the music means to them after so many years.