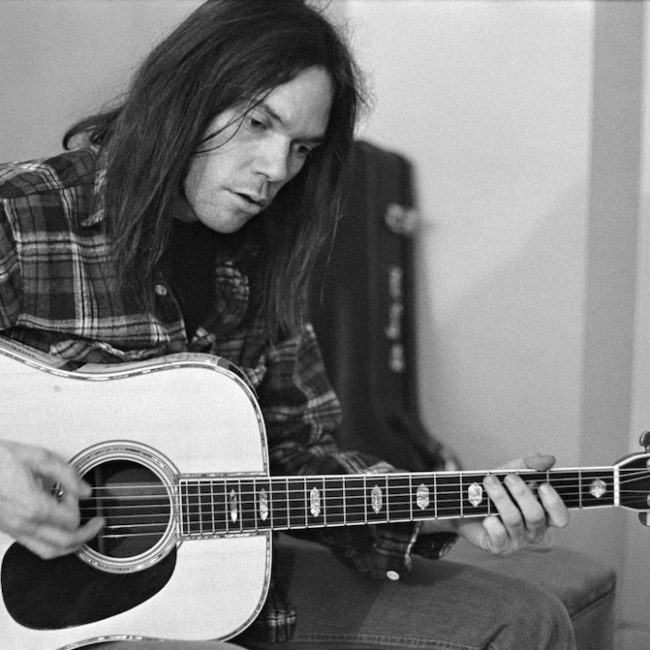 UPDATE: The December record is unfortunately delayed due to UPS literally running over the boxes of records. We’re trying to get replacements as soon as possible but the label is telling us it could be February before the replacements ship out. We’ll keep you updated.

Sign up today so you won’t miss out on this month’s record!

With a ridiculous amount of gigantic classic rock boxed sets hitting us this holiday season (Dylan, Beatles, Kinks, etc), it’s almost a relief that Neil Young’s latest archival dig clocks in at a relatively tidy 80 minutes. And it’s even familiar stuff, too! These solo acoustic performances from late 1976 have been bootlegged for decades, usually under the title The Bernstein Tapes (named after Joel Bernstein, Neil’s archivist/roadie/photographer, who compiled the collection with journalist/filmmaker Cameron Crowe).

But even if some fans know this stuff backward and forward, Songs For Judy is still an essential addition to the official canon, all cleaned up for the masses. It captures Young in brilliantly loose form, rambling but righteous. There are inspired renditions of the hits (“Heart of Gold,” “Tell Me Why,” “After the Gold Rush”) and startlingly vivid deeper cuts (“Too Far Gone,” “Give Me Strength” and the gorgeous, unreleased-until-now “No One Seems To Know”). All in all, Songs For Judy makes a fine companion to Neil’s other recent solo acoustic ’76 vault release, Hitchhiker. An artist at his peak. Or at least one of his peaks, anyway.

The only problem is that it’s only part of the story. The Judy tapes come from the first half of the ’76 shows; afterward, Young was joined by Crazy Horse for some of the most electrifying and raggedly glorious jams of his career. So we’re going to need a sequel … soon.  – words by T. Wilcox over at Aquarium Drunkard Songs for Judy Track List (all dates are from 1976)