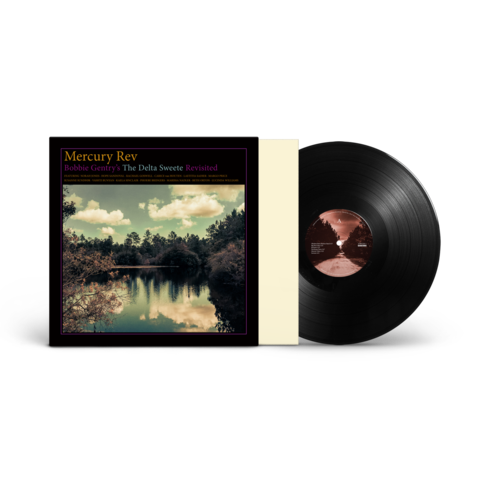 The music and legacy of Bobbie Gentry saw a nice renaissance in 2018 with several great releases including Live at the BBC for Record Store Day and an expansive CD box set–although hard for us to get our hands on, well worth it. Her famous Ode to Bill Joe record was finally reissued on vinyl and we’ve been selling it like crazy–not to mention used copies fly out of the shop. Born in Mississippi, Bobbie Gentry’s records have a forever spot on the shelves of our shop–important entries into the Southern Gothic canon of Mississippi artists.

We’re also big fans of Mercury Rev. The New York-based indie rock band released a string of great records throughout the 1990s including the excellent Deserter’s Songs (NME named it album of the year in 1998).

Record of the Month Club members will be getting a copy of the album along with a promotional poster of the album’s great artwork. From the label…it’s long but worth reading:

In 1968, just a year after she’d topped the charts with her quietly revolutionary “Ode To Billie Joe,” Bobbie Gentry released a groundbreaking album considered by many to be the true masterwork of her career: ‘The Delta Sweete.’ While “Ode To Billie Joe” was a commercial and critical smash that challenged both the artistic and patriarchal conventions of the era’s country conservatism, ‘The Delta Sweete’ was destined for obscurity. A sophisticated, swampy, country-rock opera examining contemporary life in the Deep South, the record was decidedly ahead of its time in concept and execution. Largely unappreciated by both radio and press, it never charted in any meaningful way.

Now, half a century later, Mercury Rev and an all-star cast of women (including Norah Jones, Margo Price, Phoebe Bridgers, and Lucinda Williams) have resurrected the collection with ‘The Delta Sweete Revisited,’ a brilliant, heartfelt, track-for-track reimagination that honors the original album’s pioneering spirit while simultaneously offering fresh perspective and modern insight.

“Through the years, there was just a momentum that kept bringing me back to ‘The Delta Sweete,’” says Mercury Rev’s Jonathan Donahue, a founding member of the hugely influential experimental rock outfit. “I couldn’t help but feel my heart go out for something that I’m sure Bobbie felt quite close to but seemed to be utterly unreadable to popular culture at the time. It was almost as if it was some kind of Sanskrit music that people had forgotten by the late 60’s.”

‘The Delta Sweete Revisited’ is about more than looking backwards, though. The album arrives at a pivotal moment in our national conversation about the roles, rights, and recognition of women, and it’s hard to imagine a better framework for that discussion than Gentry’s lost masterpiece. In his insightful liner notes for the new collection, Rolling Stone’s David Fricke describes Gentry as a barrier-breaking feminist “in vision, deed and success amid the strict, paternal order of the country-music industry,” and indeed her legacy lives on through each of the artists who contribute their voices to this album.

“You can feel that Bobbie was taking a musical stand when she made ‘The Delta Sweete,’ and you have to respect the energy behind that because it’s carried on for fifty years,” says Donahue. “The women on this album tapped directly into that.”

Over the years, ‘The Delta Sweete’ had developed a similar hold over Donahue’s bandmates—fellow founding member Sean “Grasshopper” Mackowiak and more recent addition Jesse Chandler (Midlake, Bnqt)—and so in 2015, they began toying with a rather crazy idea: What if Mercury Rev recorded the entire album from top to bottom? Not for release or anything, mind you, but just for the love of the songs, for the purely artistic sake of creating something they could enjoy and share with friends who felt as strongly about the music as they did.

Over the course of the next three years, a gorgeous series of sweeping, inventive interpretations burst to life in the band’s Catskills studio, faithful to the emotional resonance of the original songs but naturally filtered through Mercury Rev’s singularly daring musical psyche.

“We never for a second thought of the original as some abandoned shipwreck that we were going to plunder and raze,” explains Donahue. “We had no desire to disturb it or go down there with a giant paintbrush to dust off all the accumulated years. We weren’t looking to interrogate it like some musical artifact. We just wanted to illuminate it with our own musical lamp.”

The project quickly took on a life of its own, and soon the band had assembled an unmatched roster of women from across a broad range of genres to lend their vocals to what NPR describes as Mercury Rev’s “spectral new arrangements.” With a different singer on each track, it would be easy for a collection like this to come across as disjointed, but instead ‘The Delta Sweete Revisited’ feels beautifully cohesive, with each vocalist illuminating a unique facet of Gentry’s complicated artistry.

“It was essential to have all these strong feminine personalities on these songs because it was the only way that three men from upstate New York were ever going to be able to approach this album,” says Donahue. “The female voice is the one thing that cuts straight to the heart of everything in this world, the one thing that seems to penetrate every bit of matter that’s ever been created. Jesse and Grasshopper and I all have deep emotional connections to the music, but we’re ultimately coming to it with a limited, male, five-sense frequency band. Once we started hearing our recordings with all of the women singing in their own sincerity, it brought everything well above ultraviolet to us. It was more than we could have hoped for.”

Ultimately, ‘The Delta Sweete Revisited’ is about much more than recognition or reward. It’s a tribute to the enduring legacy of an artist who forged a path for so many to follow, a testament to the power of our connection to the music that speaks to our most intimate selves, a timely contribution to a dialogue about autonomy and equality that stretches far beyond the art itself.

“When we heard the final playback of Bobbie’s songs with each of these women singing, we realized we were part of something much bigger than ourselves,” concludes Donahue. “As an artist, there’s nothing that tops that.”