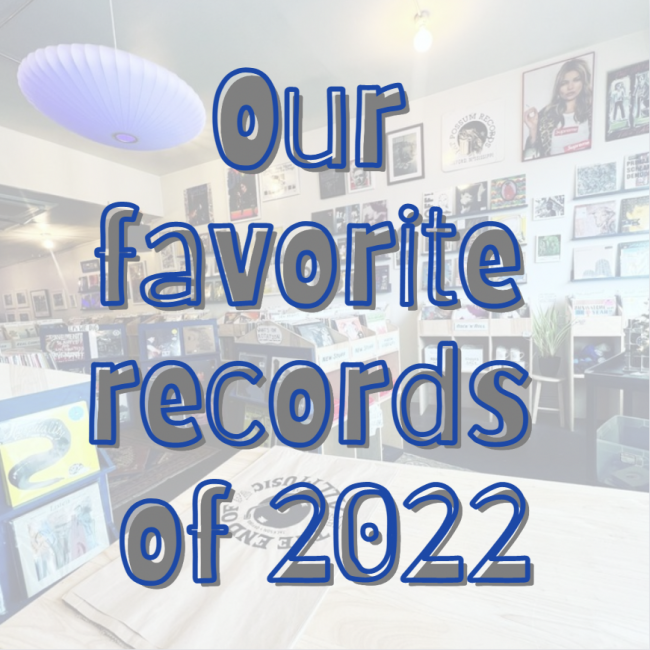 Here are our favorite records from 2022 in no particular order. These records–both new releases and reissues–stayed on our turntable and in our minds the longest.

“From start to finish, Dawn Richard and Spencer Zahn have created a truly refreshing body of work, a seamless experience. ‘Pigments’ encourages one to reach outside of their comfort zone, to listen more closely, more openly.” -Clash Music

“Conceived after Ruth was carjacked at gunpoint, and recorded in the wake of the Nashville tornadoes, this is much more than tasteful mood music, reaching hungrily for a complex spiritual resolution.” –Uncut

International Anthem continues to blow our minds with consistent, excellent releases from the world of avant-garde jazz, classical, and ambient. We pretty much buy anything with this label’s stamp of approval on the record sleeve.

“As good as OFF!’s previous releases were, they (in classic hardcore style) sounded like they were produced in hit-and-run style, with the band cutting them live with minimal overdubs. Free LSD, on the other hand, aims to be something more; in its intensity and vision, it succeeds, and it’s a gloriously weird triumph.” – AllMusic

“There’s certainly an abundance of good ideas – often several within the course of one song, with hooks emerging from the fog before dissolving as quickly as they came – but the band seem to work through them in perfect harmony, on the way to even greater things. … Their best album.” – Uncut

Just Mustard have said they wanted their second album, Heart Under, to make the listener feel like they are driving through a tunnel with the windows down. And on this noisy, wonderfully chaotic record, the band seems to have nailed it.

Happening has been on constant rotation in the shop since we got an early copy. It’s all the 1990’s greatness we long for in a rock record but it’s also fresh and new sounding simultaneously. It’s shoegaze for sure, but it’s also made for these times. This year, 2022, has been a strange year–as these strange years pile up–and it’s nice to hear a guitar-soaked rock record.

👉 Sub Pop released two of our favorites of the year: Weyes Blood’s And in Darkness and Built to Spill’s When the Wind Forgets Your Name

Cheat Codes finds Danger Mouse rolling with a new lyrical foil and this one feels like it could run and run.

A corrosively brilliant metal album that communicates what life is like for too many Oklahomans.

“Why do people have to live outside? I couldn’t survive out on the streets,” rants vocalist Raygun Busch.

“Like most debuts, Wellswood is the sound of an artist bursting at the seams with musical ideas that finally have an outlet. Combining a vast array of musical avenues with smart, complex lyrics, Thomas Dollbaum’s phenomenal first album is hopefully one of many to come.” – Pop Matters

Our favorite reissues of the year:

The all-important Krautrock duo of Rother and Dinger get the 50th anniversary treatment with an amazing box set compiling the first 3 albums plus two records of remixes and tributes.

Recorded in just one day, on October 10, 1961, The Futuristic Sounds of Sun Ra featured 11 tracks of classic Arkestra vibes. Among the selections is the Latin-influenced opener, “Bassism,” the bluesy “Of Sounds and Something Else,” and the aptly named, “What’s That?,” which breaks into a four-saxophone improvisation, stands out as an example of Ra’s early experimental work. A beautiful pressing from Craft Recordings.

This one has been a long time coming for fans of The Cure. It was so nice to see it as a Record Store Day Black Friday release this year.

Recorded at the Coltrane’s home in 1970, this record goes deep into the meditative state, and oh yea, features Pharoah Sanders and Joe Henderson! Pressed at Third Man Records in Detroit.

👉 Staples Jr. Singers When Do We Get Paid? (Luaka Bop)

Luaka Bop continues to do the Lord’s work with a reissue of the ultra-rare 1975 record, When Do We Get Paid, by teenage family gospel band the Staple Jr. Singers. Annie Brown Caldwell (14, vocals), A.R.C. Brown (15, guitar), and Edward Brown (16, vocals) grew up in Aberdeen, Mississippi, and started playing school talent shows, local churches, and neighborhood front yards. As their reputation grew, they soon started booking weekend shows across the Delta and the Bible Belt, and pressed their own copies of their sole record to be sold and shows and on their front lawn.

“Richard Thompson’s score for Grizzly Man – Werner Herzog’s 2005 documentary film of real life and death in the Alaskan wilderness – is one of the best-kept secrets in the British guitarist’s epic canon: an instrumental masterpiece disguised as a movie soundtrack.” -David Fricke

A collage of unreleased instrumentals and improvs from Sonic Youth… what more could you ask for?

Pavement’s final album from 1999 gets the expanded, deluxe reissue treatment including some interesting demos from Stephen Malkmus recorded using some funny keyboard tinkering. An illuminating look at the final days of the 1990’s and Pavement’s sole decade of releasing new music.

Produced by Brian Eno in 1978, The Pavilion Of Dreams stands toe-to-toe with another minimalist masterpiece also released that year, Steve Reich’s Music For 18 Musicians. Budd’s gorgeous pieces reveal a lightness of touch that draws the listener in, while sublime voices float in and out as if in a recurring dream. Featuring saxophonist Marion Brown and multi-instrumentalists Gavin Bryars and Michael Nyman, The Pavilion Of Dreams remains a master class in exquisite timbre and shimmering texture.

Forever On My Mind is a brand new Son House album of previously unreleased recordings from the legendary “Father Of The Delta Blues.”  The album comes from the archives of Oxford’s own Dick Waterman. Restored to remarkable clarity, by producer Dan Auerbach (The Black Keys) for Easy Eye Sound, these recordings represent the earliest recordings of Son House upon his return to the limelight after 20+ years away.

Recalling Ennio Morricone spaghetti westerns, the electrified belly dance music of Omar Khorshid, and ’90s bedroom psychedelia at once, the music of Branko Mataja is from its own epoch. Snatched from the streets of Belgrade as a teenager, Mataja spent World War 2 in a German work camp, escaping the insanity of post-war Europe to settle in North Hollywood to live out the American Dream to its fullest. Crafting handmade music on homemade guitars throughout the 1970s, Mataja taught himself to play in order to pay homage to his ancestral home of Yugoslavia, a place he would never return to except through these guitar meditations.