The photography of Adam Smith at the JXN shop! 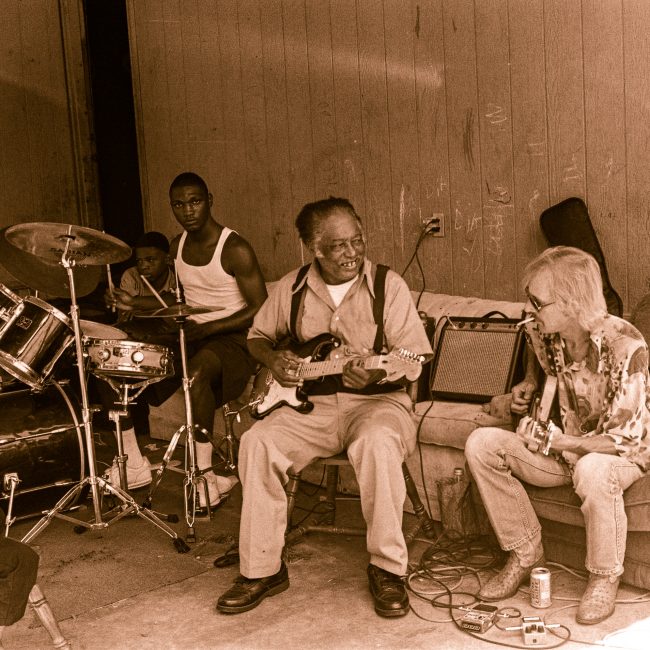 Adam Smith will be present for the opening event.

Photographs and prints will be for sale.

The bar at the shop will be open, serving beers.

We’ll be DJing some of our favorite Hill Country Blues LPs.

For almost three decades, award-winning documentary photographer Adam Smith has earned international acclaim for his clear-eyed and candid work chronicling the music and landscape of the American South, from the heat and sweat and unbridled energy of juke joints and country blues lounges to front porches, back country roads, and those who have long called these places home. Born and raised in Macon, GA, Smith has created a stunning portfolio of iconic symbols of the Southern tradition, most notably his celebrated portraits of such legendary North Mississippi Hill Country and Mississippi Delta blues artists as Junior Kimbrough, R.L. Burnside, Othar Turner, T Model Ford, and Paul “Wine” Jones, musicians too often forgotten, and little known outside their region but whose impact carries on to this day. Widely hailed for his deep tonal range, powerful use of strong shadows, and remarkable sense of space, Smith captures the enduring history of a fading world, portraying the people and places that define the Deep South with integrity, striking humanism, and infinite compassion.

“I consider myself a documentary photographer. I want my work to stand on its own and not just be a photograph of R.L. Burnside or Marty Stuart. I want it to be an image that speaks to someone, no matter it is.”

Smith grew up in Macon with a love for music and nascent interest in photography garnered from childhood dabbling with his father’s camera (Canon AE-1). In 1993, he headed off to Oxford, MS to attend the University of Mississippi where he took those passions further under the tutelage of documentary photographer Tom Rankin, at that time head of Ole Miss’s Southern Studies program. His search for a subject matter led him to Junior Kimbrough’s famed juke joint in Chulahoma, MS, about 45 minutes outside of Oxford and only open on Sunday nights. A former church, the one-room shack was barely lit, with a pool table at its center and a jukebox playing blues in the back until Kimbrough and his friends took the stage. The power of the music – unfiltered and natural, full of excitement, passion, and energy – struck a chord in Smith unlike anything he’d heard before.

“I was lucky, because most people don’t get that kind of chance,” he says. “I started shooting – I don’t use flash when I shoot live music, I don’t ever want bring a lot of attention to myself – but I was in the pit, Junior was playing, David Kimbrough was on bass, Cedric Burnside was on drums, and I literally came to tears. I realized right there and then that was what I wanted to do with my life.  I wanted to capture, on film, the energy and the emotion and raw blues that were coming out of that place.”

Smith returned over the months and years that followed, building a personal relationship with the notoriously reticent musicians built on trust and respect for their professionalism and history. With great heart and passion, Smith shows dramatic arc of time on his bluesmen, revealing the impact of an all too often hard life on his subjects’ faces while simultaneously remaining ageless in his overall presentation. Smith further tried to tell his subjects’ story by spending significant time shooting the stark but scenic landscape, church services, and small-town community events which fueled and inspired them.

“Somebody once commented that when they looked at my images, it shows through my work how much I believe in it, and believe in them,” he says. “That I’m passionate about this music and I always painted these artists in a very proud light that shows how proud they are of what they do.”

Having become a mainstay in the Hill Country blues world, Smith made the acquaintance of Mississippi-based music industry veteran Amos Harvey In 1998. Harvey connected him to Oxford, MS independent label Fat Possum Records, resulting in one of his images appearing on the cover of Junior Kimbrough’s 1999 LP, Meet Me In the City. Smith’s fruitful relationship with Fat Possum continues to this day, with the now internationally prominent label continuing to use his photographs to promote the blues artists that are the foundation of the label.

Smith’s immediately iconic images – and intimate knowledge of the region and its renowned bluesmen and juke joints – caught the interest of famed photographer Annie Leibovitz, who enlisted his help arranging sessions with R.L. Burnside, Othar Turner, and others for her 2003 collection, American Music. More attention came in the years that followed, with his work featured at leading galleries in Oxford, MS, Atlanta, GA, and his hometown of Macon, where he was named “Photographer of the Year” by that city’s 11th Hour News Weekly.  Smith himself was profiled on Tales From The South’s Tin Roof Project, presented by KUAR (FM 89.1), the Little Rock, AR affiliate of National Public Radio (NPR), and syndicated nationally across a range of platforms. Smith’s photographs have been chosen for permanent display at the Georgia Music Hall of Fame and featured on TV’s CNN Nomad with Carlton McCoy, while “I Fell Down On My Knees.” Also, a striking photograph of the crossroads off Old 61 in South Clarksdale, Mississippi, is featured in Alan Greenberg’s prize-winning 2012 biography Love in Vain: A Vision of Robert Johnson.  Most recently, work from Smith’s Mississippi Hill Country catalog is the showcased in the in depth article Guitar Player Magazine published call “The Evolution of Hill Country Blues.”

In 2002, Smith relocated to Atlanta where he managed the Department of Photography at the Atlanta College of Art while also pursuing a career in freelance photography. Smith has photographed iconic blues musicians from across the South, including Rev. John Wilkins, Precious Bryant, CeDell Davis, and the great Robert Lockwood Jr., as well as contemporary blues masters including Alvin Youngblood Hart and Luther and Cody Dickinson of North Mississippi Allstars. Along with his work chronicling Delta blues, Smith has shot legendary artists across an array of genres, including such country music icons as Porter Wagoner, Ralph Mooney, and Marty Stuart, with whom he collaborated on the acclaimed 2010 LP, Ghost Train: The Studio B Sessions.

“Marty is a hell of a photographer himself, so for him to like my work and want to work with me was just the bee’s knees to me. Marty is one of the most genuine, funny people I’ve ever met. So nice. My wife is actually from Philadelphia, Mississippi, which is where Marty is from, so we have a little bit of a connection there.”

Raised up on rock ‘n’ roll, Smith has also sought out and shot some of the contemporary Southern artists who are keeping that tradition alive, including Drive By Truckers, Sturgill Simpson, Jason Isbell, Lucero, to name just a few.

“When I moved back to Georgia, I was really hurting, trying to seek out some places to shoot,” Smith says. “One of my friends said, have you seen this band, Drive-By Truckers? So I went to see them and they just blew my mind. Lucero from Memphis are another example of that. So much energy on stage, so much passion, which is going back to that same thing I’ve always been looking for.”

“I really like working with artists who are just getting started,” Smith says. “Who are hungry as hell to get what they need.  I guess I just feel like it’s more real at that point in their career. I feel like I can get more out of them.”

Throughout his career, Smith has long made a point of giving back to these important American artists whenever possible, using one of his images – and a number of plastic jugs placed around Oxford bars and restaurants – to raise funds with Harvey to ensure a proper headstone was placed on Junior Kimbrough’s grave. When a fire destroyed Kimbrough’s famed North Mississippi juke joint in 2000, Smith helped raised funds for the many musicians who lost instruments and equipment in the blaze.

Having created a visual history of Hill Country blues, in 2020 Smith presented The Killing Floor, a podcast showcasing his field recordings with R.L. Burnside, rare interviews that offer still more historical perspective on a truly significant American artist. Smith is currently focused on developing Down In Mississippi, an extraordinary series of exhibitions showcasing his three-decade photographic journey accompanied by live music performances from such friends as Cedric Burnside, Lucero’s Ben Nichols, North Mississippi Hill Country Blues guitarist Kenny Brown and bassist Eric Deaton, Alvin Youngblood Hart, Luther Dickinson, and more. Held at music venues across Georgia and Mississippi, the events offer a more well-rounded view of his work, bringing together visual components and musical power to create a multi-media show more in tune with his overall creative aesthetic than a traditional gallery show.

“I want the viewer to not only look at the photography, I want it to be an all-around experience. I want it to encapsulate everything about my work. I’m really having a good time planning these shows, making them to where an audience gets kind of a full view of the whole shebang.”