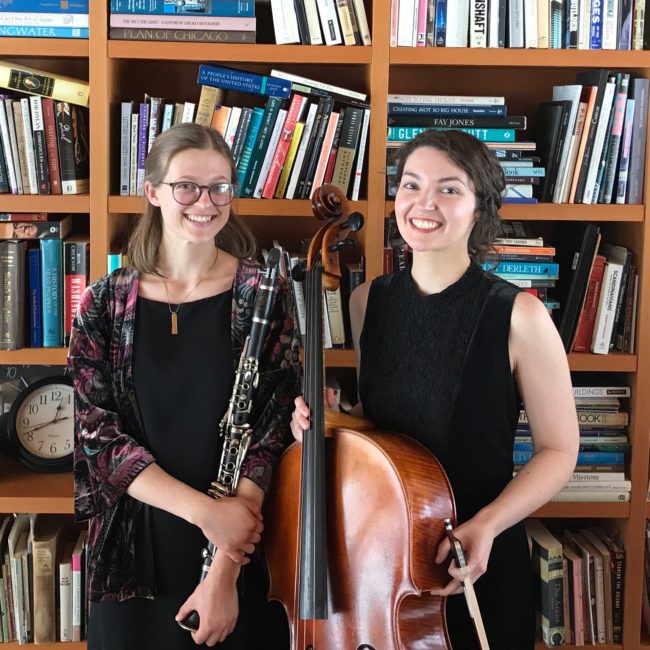 UPDATE: Due to the recent pandemic this event has been cancelled. We hope to reschedule later this year.

This is a truly unique in-store performance unlike anything we’ve done before in our 8 years. We’ll be hosting Ole Miss Alum, Kim Cassisa, (clarinet) and Eva Richards (cello) from the University of Iowa. The artists perform modern classical under the name Unsilent Duo.

The duo will be performing more traditional as well as very experimental pieces, including a work that was written this year by Christine Burke. The group will also perform one piece that is a music maze of sorts consisting of musical notes (notated with letters of pitches)–a very unique piece and good for any size group to read on the spot, as it’s pretty improvisatory and open to interpretation. Attendees are encouraged to bring their own instruments if they’d like to join in on the maze piece (called Alcazar)–knowledge of reading music isn’t necessary to participate. Anyone who plays a pitched instrument (guitar, trumpet, etc. etc.) is also welcome to bring it and participate.

This event is intended to be both participatory and observatory. Bring an instrument and join in or just hang out to witness and hear a truly unique, immersive musical experience at the record store.

Seating will be available.

Tickets are not necessary.

Event is free and open to the public.

From the artists:
“Our program is going to explore the intersection between music and literature. All the music is 20th-century onwards, with some more standard composers (Hindemith) and mostly lesser-known composers, most of them still living (Xenakis, Shulamit Ran, Luna Pearl Woolf). We’ve also commissioned several pieces being written for us, and are very excited about the prospect of sharing those.

For the show at the record store, we would look to involve the audience as much as possible – we don’t want this to be at all like a typical “classical music” concert where the audience sits quietly and claps at the end. We’ve got some ideas in the works for how to interact with the audience, and one idea we have is to make the last piece a collaboration, and invite the audience to bring any instrument they play and play with us. It would be a really cool way to end the show and break the traditional performer/audience barrier.